(an extract from a history of Holcombe Rogus by Michael Brooke-Webb (2006), available at the village shop. Acknowledgement is due to Mr Brooke-Webb for kind permission to use this extract. The paragraph about the school today [*] has been updated.)

In a will of 1701, Nicholas Ayshford left £1200 to Robert Kerslake of Holcombe Rogus upon trust, to lay out part in building a school and school house in Uffculme and the remainder to buy land to endow the school. Robert Kerslake spent £400 buying a piece of land and building the schoolhouse but kept the balance of £800. In his will dated 7 March 1719, he gave the balance of the money to his sons Robert and John Kerslake in trust to apply the rents towards repairing the school and directed his executors to buy the land that he should have bought in his lifetime.

Robert & John kept the money although they nominated a schoolmaster and paid him and kept the school repaired. Robert who survived his brother John, left all his estate to a nephew (another Robert), the son of John. He continued to pay the schoolmaster until 1769 although the buildings were allowed to get out of repair. He died in 1771 leaving his estate to two brothers-in law, Cornelius and Thomas Marsh, who paid the schoolmaster until 1771. The unfortunate schoolmaster, George Greenaway, died in 1789 by which time he was owed 18 years salary. Ultimately, proceedings in Chancery were taken in 1799 against Cornelius and Thomas Marsh by the Attorney General and the representatives of George Greenaway were awarded £646.18s.4d and the balance recovered of £1239.18s.6d, less costs, was used to endow the school under a totally new trust.

Holcombe Rogus retained the right to send one boy to the school to one of four free places but only one was nominated in the ten years from 1803 to 1813. The problem was that instruction was confined to the Greek and Latin languages and the reason for lack of interest was given ‘that the inhabitants were not desirous of obtaining a classical education for their sons’.

It is not clear what formal education, if any, was available in the village prior to the establishment of Webber’s Charity School in 1823.

On 10 September 1823, Susanna Webber of Lambeth assigned a building:

“on the north side of the dwelling house occupied by a widow named Elizabeth Grant, widow with the appurtenances, situate in the town and parish of Holcombe Rogus for the residue term of 21 years then vested in the said Susanna Webber .....wherein a school was to be established for the purpose of teaching and instructing 20 poor boys and 30 poor girls and as many more as conveniently might be, belonging to or for the time being residing within the parish of Holcombe Rogus, upon Dr Bell’s system of education.........”

At the same time Miss Webber transferred £1000 New £4 % Bank Annuities into the name of four trustees including Tristram Whitter, the vicar. The endowment was to meet the expenses including “to pay the mistress of the said school the yearly salary or allowance of £20 and also the yearly sum of £6 for purchasing coals and other articles for use....”

Apart from the specified numbers of boys and girls mentioned above, the rules were:

(1) That the children shall be instructed in the principles of the Christian religion and in reading and other branches of learning according to Dr Bell’s system of education and in sewing, knitting and other such employment, suited to their age and sex, as may best tend to fit them for a useful life.

(3) That no child shall be admitted into the said school under the age of six years of age nor be kept there after twelve years of age.

(4) That no child shall be admitted into or instructed at the said school for fee or reward.

(5) That the teacher shall be female and of the Church of England.

(6) That the said teacher and children may be removed or expelled at the
discretion of the governors or a major part of them.

On 18 April 1849, Peter Frederick Bluett and his wife Caroline in consideration of the sum of 10s. conveyed a piece of land for building the present school which was built at a cost of £170 out of surplus income and opened on 26 September 1850. In 1875 it became girls only when the boys went to Mrs Rayer’s school. Additional land for the play area was acquired on 11 December 1902 and an additional classroom was built in1903-4 at a cost of £85. It reverted to being boys and girls in 1902 when the infants went to Mrs Rayer’s and finally amalgamated with this school in 1917. In 1945 the seniors were removed and it was given Aided Status in 1953.

The longest-serving head appears to be Sarah Coleman who was at the school from 1863 to 1901, a total of 38 years.

[*Webber’s School continues as a church school most successfully to this day in the original buildings with several later additions including a swimming pool and two additional classrooms (2011). From January 2013 it became part of the Valley Partnership, a federation with Burlescombe Primary School. The current number on roll (April 2013) is 69] 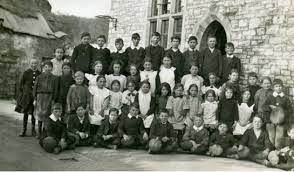 This school was provided by Mr W C Rayer in what is now ‘Old School House’ in the centre of the row of attached buildings on the south side of Fore Street. A Parliamentary Return of 1906 gives the year of establishment as 1868 though the Directory of 1883 states that it was erected in 1875. It is the only building in the village of dressed stone apart from the Victorian wing of the Court and as it is contemporary and was built by the Rayers’, it may have been constructed using surplus stone from that project. It must have replaced an existing cottage as there is no gap shown in the row in the Tithe Map of 1838.

It was established as a mixed school for all ages but became boys only in 1875 when Webber’s became girls only. It became infants only in 1902 and continued under the Local Education Authority as a Voluntary Church School until 1917 when it was amalgamated with Webber's. Infants remained in its original building as a department of Webber's until the end of 1922.